Home Our Past Black Soldiers Fought in the Civil War

Many of you may have seen the movie “Glory” which featured Denzel Washington and Morgan Freeman.  This award-winning film told the story of the Massachusetts 54th. If you saw the film, you know that Black soldiers fought on the Union side during the Civil War.  What you probably don’t know is that 186,000 Black troops fought against the Confederacy and approximately 40,000 died.

In 1865, when the Confederacy was one month away from defeat, they desperately tried to enlist slaves to fight on their side. The South used many slaves as laborers to support the troops. Historians estimate that only 3,000 to 6,000 served as Confederate soldiers, despite the myth spread by Neo-Confederates that 100,000 Black men fought against the Union…NOT!

Please click on the attached link for more interesting facts and figures on Black soldiers who fought on the Union side and the Confederate side during the Civil War – Legacy of Civil War Black Soldiers by Ken Stover of CivilWarAcademy.com. For instance, did you know that there were 120 Black Infantry Regiments in the Union Army? Go to –   https://www.civilwaracademy.com/civil-war-black-soldiers

To learn about some of the brave African American Marines who fought in World War II, check out this story we previously posted on the Montford Point Marines. https://ngrmagintl.com/montford-point-marines-1942-1949/ 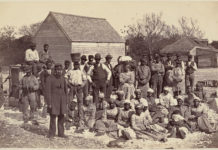 How Many Slaves Landed in the US?